If Coca-Cola really wants to solve their plastic bottle pollution, the company should support the introduction of Deposit Refund Systems worldwide and urgently reduce their plastic use as much as possible.

The international movement of plastic-fighting NGO’s Break Free From Plastic reacts to the announcement of partnership between top plastic polluter Coca-Cola and The Ocean Cleanup: “If Coca-Cola really wants to solve their plastic bottle pollution, the company should support the introduction of Deposit Refund Systems worldwide and urgently reduce their plastic use as much as possible. The Ocean Cleanup is only an end-of-pipe intervention that will not stop the worldwide plastic pollution crisis which Coca-Cola is co-responsible for”, Corporate Campaigns Coordinator Emma Priestland says.

In a video on Twitter, Boyan Slat of Dutch company The Ocean Cleanup announced that Coca-Cola will be a so-called ‘implementation partner’ of their River Project. Over the next eighteen months they plan to roll out fifteen ‘interceptors’ in rivers worldwide. In the video, Slat mentioned that this cooperation was one of the hardest decisions he ever had to take. 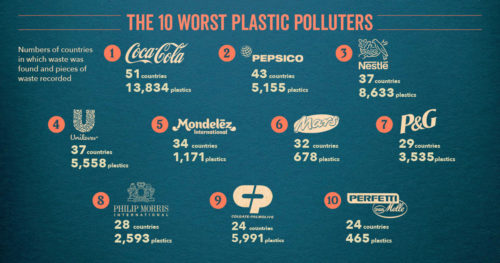 For three years in a row, Coca-Cola has been listed as the biggest plastic polluter worldwide in the Brand Audits, a series of monitoring reports conducted by Break Free From Plastic (BFFP) based on hundreds of cleanups in over 50 countries and 6 continents.

“For years, we have been asking Coca-Cola to tackle their pollution at the source instead of at the end of the pipe. There is no need for cleanups if plastic bottles never reach the rivers or oceans. Deposit refund systems (DRS) achieve exactly that: they reduce the number of plastic bottles in nature by 70 to 90 percent according to a study commissioned by the Dutch authorities. It is time that Coca-Cola stops fighting deposit refund systems and starts implementing them,” says Rob Buurman, director of Dutch-Belgian environmental NGO Recycling Netwerk Benelux.

A deposit refund scheme is a system in which consumers pay a small deposit for beverage containers, which is refunded upon return to a shop. Such schemes are crucial to boost refillable bottles and are already up and running in 40 countries in the world, where collection and recycling rates of beverage containers are often above 90%. Coca-Cola has been fighting the introduction of DRS and other progressive legislation for decades, while promoting voluntary targets and false solutions, such as clean-ups.

While Coca-Cola claims to be committed to a ‘World Without Waste’, an independent investigation by the Changing Markets Foundation found that the company has also continuously broken, delayed or shifted the goalposts on most of its impressive-sounding voluntary targets for the last 30 years. In 1990, for example, the company committed to having 25% recycled content in their bottles, but 30 years later they are only at 10%.

“Prevention is better than cure. We will not settle for projects that are only intended to create a better image for multinationals. We want real solutions that prevent Coca-Cola’s bottles, cans and pouches ending up in the rivers, seas and oceans in the first place. Therefore, we demand Coca-Cola to fully support the introduction of deposit refund systems for their beverage containers and urge them to make a decisive shift to refillables, in every country in the world”, Break Free From Plastic concludes.

About Break Free From Plastic

Break Free From Plastic is a global movement envisioning a future free from plastic pollution. Since its launch in 2016, more than 11,000 organizations and individual supporters from across the world have joined the movement to demand massive reductions in single-use plastics and to push for lasting solutions to the plastic pollution crisis. BFFP member organizations and individuals share the common values of environmental protection and social justice, and work together through a holistic approach in order to bring about systemic change under the #breakfreefromplastic core pillars. This means tackling plastic pollution across the whole plastics value chain – from extraction to disposal – focusing on prevention rather than cure and providing effective solutions.