Countries who want to export plastic waste that cannot readily be recycled, will need the consent of the authorities of the receiving country.

With this legally binding framework, the United Nations intend to stop the plastic waste flowing to South-East Asia.

Norway launched the initiative last year in september. Environmental organisation Zero Waste Europe supported the proposal. On May 10th, more than 180 countries signed the agreement in Geneva, Switzerland, with the United States as an exception. It will take a year to come into force.

In practice this will mean that the dumping of difficult to recycle plastics in Asian countries, will become more difficult. Many plastic waste streams will need to be registered and notified. According to Rolph Payet of the UN Environment Programme this means that “there is going to be a transparent and traceable system for export and import of plastic waste.” It could also very well mean that western countries will need to start processing more plastic waste in their own regions – instead of dumping it in Asian countries.

Since the 1990’s, Europe had been exporting more than 40 percent of its plastic waste to China. After importing the world’s plastic waste for decades, China decided to ban the import of plastic waste at the start of 2018. The ban concerns lots of different types of plastic, PET, PE, PVC, PS, “other” plastics, textiles and unsorted paper waste.

The Chinese ban led to a waste crisis all over the world. It has lead to waste stockpiling up in the US and Europe, illegal waste burning in Poland, and encourages the European Commission to push on with the Plastic Strategy and the Single-Use Plastics Directive. 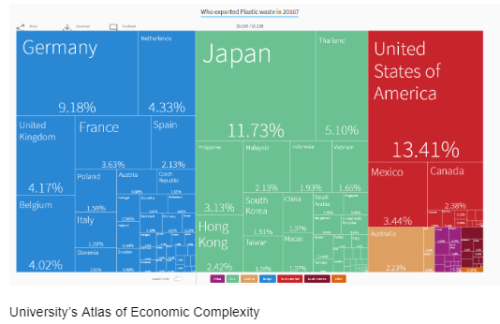 In 2016, 46% of all plastic waste export in the world went to China. Europe exported most, 2,9 billion of metric tonnes. That’s at least 40 % of Europe’s plastic waste. The Netherlands and Belgium are among the world’s top exporters of plastic waste. In 2016, they both had a part of 4 percent of the world’s export, according to the Harvard University’s Atlas of Economic Complexity.

The Chinese ban meant that waste traders started looking for new places to easily get rid of the worthless piles of plastic waste. Countries in South-East Asia such as Indonesia, Thailand, Vietnam and Malaysia became alternative destinations.. The new UN rules try to prevent the dumping of plastic waste in these countries.

China expands the ban on waste imports in 2019

In 2019, China will ban the import of even more waste products. The list of banned products is extended with hardware, ships, auto parts, waste and scrap of stainless steel, titanium and wood, the Chinese official news agency Xinhua announced in november 2018.

Considering the huge impact the former import ban had on the waste sector of Europe and the US, this ban will have vast consequences as well.

Turning the crisis into an opportunity

“The European governments should turn this waste crisis into an opportunity for a drastic reform of their waste policies. These policies have to take environment protection way more into account. They have to be integrated in the plans on circular economy and climate change as well”, comments Rob Buurman, director of the Dutch-Belgian NGO Recycling Netwerk Benelux.

Therefore, the national and European authorities should reform the plastics economy. Products purely made from virgin plastics should be phased out. The vast number of different types of plastics and additives needs to be significantly reduced to make recycling more effective and economically viable. The best separate collection systems such as deposit refund schemes need to be implemented. A shift from single use to refillable and reusable should be stimulated with legislation, fiscal incentives and taxations on e.g. single use plastics. In the end: we need to start using significantly fewer plastics and when we use it, we need to make sure it doesn’t become waste.